Five weeks ago, the telephone rang just before 8:00 a.m.
I had just gotten out of the shower and was towel drying my hair.

"Hello, this is M.S. Hospital calling."
My heart sank. "Yes?" I managed to croak.

"Your husband is desaturating."
That meant his oxygen level in his blood was very low and if they were calling me, it was because they could not get it up to acceptable levels. Bad news.

My mind went into over-drive. He's in a coma and the nurse did not want to tell me. She did not answer my question, but just said he was sleeping. If his sats were that low, then of course they couldn't wake him up. And we all know there is no resuscitation in the palliative ward.

Is he alive? Will he still be there when I arrive?
"Please God." I prayed. "Not yet. Not yet."

Driving as fast as I could, my mind sending David signals.
"Don't go, yet, sweetie. We still have lots to say. Lots to do yet. I haven't given up hope of bringing you home!! Hang on. I'm coming."

I don't know how I managed to do it, but I missed the exit. How on earth could I do that? This car has been driving to the hospital for 3 weeks, doesn't it know the way all by itself?

And then a great wave of peace washed over me. If I missed the exit there is a reason. And there is nothing whatsoever I can do to stop or change whatever will be.

That peaceful feeling did not last long, as it took me an extra 20 minutes (on top of the usual hour) to get to the hospital. Frantically I parked the car. Slammed the door. Bolted up the stairs to the third floor. Passed the nursing station. Hmmm. Nobody there, that must be a good sign. Nobody to waylay me before I enter Hubby's room. Round the corner. Hubby's door is open. Hmmm. Another good sign. If it had been closed....

Tore open the curtain to see David lying in bed, looking a little groggy, but reading the newspaper! I ran over and gave him the biggest, most giganticist hug you can imagine.

He looked at me in surprise. "Am I dreaming? What are you doing here so early?"

Apparently his oxygen mask had fallen off sometime in the early morning hours. I don't know how long he was without oxygen, but when the day nurse came on duty, she saw David in bed, face a grey colour and his mask dangling over the edge of the bed. She put it back on and then got the oxymeter to measure the oxygen saturation in his blood. She told me at first she couldn't get a reading, so called for help. He was still breathing, so after a few minutes the oxygen reading was 50 (normal being from 90-100). The nurse told me it took an hour to get his sats back up to normal. They had to put extra oxygen on to do that.

What a scare for everybody.

His doctor sat on the bed and said "that was a close call, but it wasn't so bad, was it? There was no pain, no shortness of breath."

David has had many close calls over the past few years. I sometimes think he is living on borrowed time (as the old saying goes). When I got home that night, I needed to write; as if drawn back into ancient times:

STANDING AT THE BRINK

He is standing at the edge of a Cliff.
Looking down.
Scared. Fearful.
"I do not want to go there."
And he steps back.

"Wife," he says on coming home, "I stood at the Brink today."
"I know," she murmurs, pulling loaves of fresh bread out of the oven.

Time passes.
Another Day.
He finds himself standing at the edge of the very same Cliff.
Looking down, he sees fierce-looking animals.
"No, I'm not going there."

Years before, in a dream he saw himself walking to the end of the Earth.
To the Brink. Where there was nothing but air below.
"I can't go there. I don't have wings to fly."
Just then an angel floated by. His father.
"Not yet," he sang to him, "not yet."

And so he went back home.
"Wife," he says, "I stood at the Brink today. There was nothing below. Just Air."
"I know," she murmurs, ladling out soup for their supper.
Night time. They are sleeping under the Stars.
Wife looks up into the night. And cries softly.
One of those Stars will soon be Husband.
She knows in her heart.
He rarely leaves the House anymore.

Once again He stands at the top of the Cliff. Afraid to look down.
But he knows he must. He's been here before. His body is showing him the way.

Looking down, he sees before him a black pit.
"No, I'm not going there."
And he steps back.
To let somebody else go.
Looking around, he sees many Souls taking the Leap.
Some take the plunge with strength and dignity; others hesitantly with fear.
Nobody returns.

Now there are people with him as he makes his way to the Cliff.
His footsteps grow heavy.
Second Son says "it's just the natural order of things".
"Have a safe passage" whispers a relative.
"We'll make you comfortable when it's time to go," chants the medicine man.
"Are you alright?" concerned friends ask.

And goes home to his wife.
Where he finds her preparing his favourite foods. She knows that one day he will not come home for supper.
But every day she cooks.
Every day she waits for him.
Every day she listens for his footsteps.
Every day they sit down to eat.
"How are you?" she asks.
"I"m tired."
'I love you." her eyes go soft as she looks into his.
"I love you too." his eyes speak from his heart.

She knows his time is near; that one day he will not come home to her.
She knows it will be a time when there is nobody about.
Nobody to watch. No one to interfere.

He will slip away quietly in the early hours.

....lining, as the old saying goes. The flowers strewn along our steep and rocky path. The diamonds in the rough. 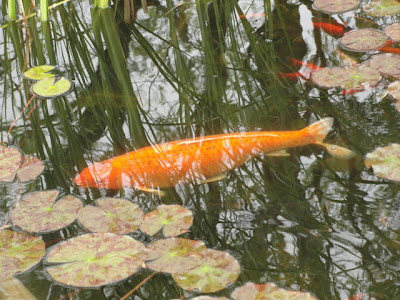 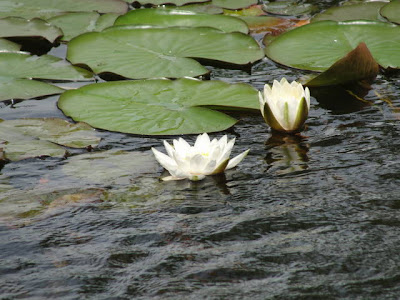 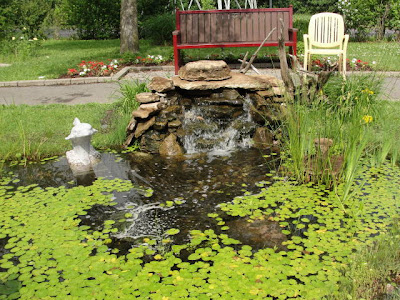 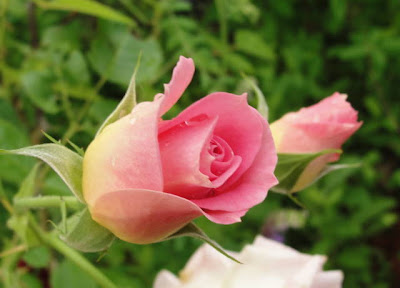 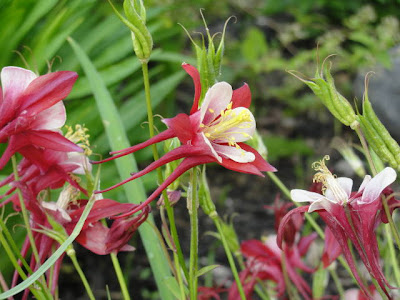 As you can see, I've taken some time to reacquaint myself with a very good friend of mine - my camera. Out in the healing garden, I absorb the peaceful surroundings and lose myself in capturing a goldfish, a waterfall, spring flowers. How lucky we are to have this hidden paradise, this center of calm, amidst the harsh reality of disease.
David has been out in the healing garden 3 or 4 times since my last post. He tilts his face up to the sun and lets out a sigh of contentment. So relaxing, so nice to enjoy the warmth and healing golden rays. Some days he's too tired. Some days the weather is rainy, but on good days we go out. Just for half an hour more or less, but at least we have this time.
We've also made friends with the volunteers. They are truly incredible people. I did not know just how valuable to the hospital these dedicated souls are. There is one sweet gentleman with white hair who brings my husband his morning coffee and newspaper every day.
Every day.
He never takes a day off. He's always there. You will see him feeding elderly patients, pushing a wheelchair in the garden, accompanying someone to an outside appointment, fetching towels or soap for a bath. He does everything with a smile.
Another one is a wee, tiny little old lady (I'm sure she's 85 or so), who comes around every afternoon with the "snack cart."
"Tea, coffee, cookies, ice cream?"
I sometimes feel like a kid again at somebody's birthday party, being served cookies and ice cream. But she's a dear. And so tiny, she reminds me of a doll with her clear blue eyes and soft white hair.
Oh, and there's Spa Day.
Spa Day happens once a week.
The patient is taken from their bed and put right onto a bath stretcher, covered up with flannel sheets and wheeled down the hall to the Spa Room.
It's dark when you first enter the room.
Ah, but then you see the tiny tea lights glowing softly from the walls and shelves. These are made to look like candles (real candles being forbidden of course) lending a romantic atmosphere.
Champagne cooling in a silver bucket beckons invitingly from a shelf (no it's not real).
Lovely relaxing music plays in the background.
An ocean scene has been painted on the wall to give the illusion of being at the beach.
The bath stretcher is lowered into the tub. The patient doesn't even have to move. They just lie there, secured to the stretcher while fragrant warm water rushes into the tub. Luxuriant bubbles foam up around the person, as much for modesty as for fun, I think.
There is an oxygen outlet on the wall, so hubby can plug in. No worries. The staff are good. I sit nearby and watch. Hubby is fine. He's relaxed and soothed. It's such a treat that the nurses all joke that they need a Spa too!
"No, I'm next!" I joke along with them all.
And we laugh.
It feels good to laugh.
Posted by Wendy at 8:48 PM 22 comments: