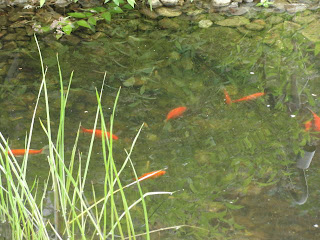 One thing I have learned on this journey, this steep and rocky path is to never give up hope. I did. Many times over the past few years of David's illness, I totally and completely gave up hope. He would never get better. There is no cure for lung disease. He would die.

However, I watched him give up hope, only to find it somewhere else. A kiss,  a cuddle, a smile, a shared memory, the voice of a grandchild over the phone. Life goes on until the candle flame goes out.

They advise you in palliative care to never give up hope. I used to get angry at that, for how can one hope when you know that death is certain? What good is hope?

Until then, you go on living because that is what you know. David was in palliative care for just over two months. About a month into his stay, he mentioned to his doctor that his cataract was giving him more trouble than usual. An opthalmologist would be making rounds next week, how does that sound?


Inwardly I cringed. What on earth does he need an opthalmologist's consultation for? How much longer will he be alive? Does he really want to undergo a "procedure" at this stage of life?
It didn't matter for the opthalmologist did not come as scheduled, and would only be available next month. Too late in any case for David. I asked a friend of mine whose husband had passed away the year before. She said "well I guess they only know how to live, not die. My husband wanted to have all kinds of dental work done his last year of life; work he had been putting off for years. I went along with him - whatever floats your boat, honey. Maybe he wanted to die "whole". I don't know."
Two weeks before David died, his medical licence renewal came in the mail. As was our habit, I brought the mail to him every day. He looked up at me with a question in his eyes. I nodded my agreement, so he quietly wrote out a cheque, filled out the form, and handed the envelope for me to put into the mailbox.
He died a licenced physician - just as he had lived. Wishing you and your loved ones a peaceful Holiday Season, filled with joy, hope and blessings.
Posted by Wendy at 11:49 AM 32 comments:

I hired someone to paint (about 3 weeks ago), because I liked his name. It was Liam and I liked how that name just rolled off my tongue. He seemed to be a nice, upstanding young man;  pleasant with a cheerful manner and an agreeable smile. However, his work was terrible! So I fired him.

My daughter advised me to call Mr. Experienced Handyman, a fellow recommended by a friend, who had painted their house a year or two ago.

So I called Mr. Experienced Handyman. He was not available right then, but could I wait about 5 days or so? Hmmm. Not the answer I wanted. When you're ready to have the house painted, you don't want to wait. Oh well, I guess so.

Three or four days later, I came down with a doozie of a cold, so put house painting and renovations on hold.

In the meantime, I thought I'd call around and find somebody local. Mr. Unexperienced Handyman came  by to give me an estimate. He too was polite, but this time I was ready. "How would you fix this problem?" I asked pointing to some bumps in the wall that were obviously screws or joists protruding through. He looked a little unsure for a minute before happily providing what he thought would be the "right answer". It wasn't (I won't bore you with details).

I called somebody else. His name was Mr. Dude. Well, I'd learned not to judge a person by his name, so asked him to come by. He offered his renovation skills as well. Since I needed a sink and toilet replaced in the small downstairs bathroom, he gave me an estimate for that at the same time. But he could only come two weeks down the road.

I was starting to get frustrated. It seemed to be taking longer to choose a good worker than to actually have the work done!

I called Mr. Experienced Handyman back once again, since he'd done a decent job in my daughter's home. There was no answer and he didn't have an answering machine. Odd in this day and age.

In desperation I called a painter David and I had hired five years ago. He was very good, but rather pricey. And since I'm refreshing the house to put up for sale, I don't really want to spend a lot of money. Mr. Expensive did come over and just as I'd thought, his prices were more than I wanted to pay. But - he could come within a couple of days.  Hmmmm.

A couple of days came and went and no Mr. Expensive. His "other job" would take another week to complete. Figures.

Decided against Mr. Dude installing the the sink and toilet, as somebody else, a Mr. Old  Handyman-with-a-truck told me he would pick them up at the Home Depot instead of me paying a hefty delivery charge. Fine, good, but this guy doesn't paint.

However, when I went to Home Depot to choose a sink and matching toilet, the salesman told me they were the last ones in stock. Groan....  So I had the young man hoist them into my car and home I went. Once in the garage, it was easy to remove the sink (it comes in pieces) from my car but the toilet was heavy. I looked around to see if any of the neighbours were about. The couple across the street were in their driveway, along with some members of their family. However, it was their wedding day - definitely not a good day to ask one of those finely dressed guests to come over and help remove a toilet from my car.

Ever the resourceful one (or more likely the stubborn one), I eased the toilet from the trunk of the car onto a garden chair, which I had pushed over there to catch it. Otherswise, I'd be carrying a toilet around in my car for days on end. But now I have a toilet (in a box, of course) sitting in the garage in a garden chair. The sink is lying in pieces next to it.

And, I still need to hire a painter. I decided to call Mr. Dude. Could not find his number anywhere. Ah, but I had his email. Sent him an email telling him that the toilet and sink were installed (they were not as yet, but hopefully soon), so could he come and do the painting instead?

He did not answer my email. Is he mad? Who knows. This is business. Tough luck. I'll try Mr. Experienced Handyman-who-had-painted-for-my-daughter.

He was not home, of course, but this time his wife answered. Yippee - progress! I left him a message - could he come on Monday to do the painting?

Went upstairs to check my email. There was a message from Mr. Dude-who-was-not-installing-the-toilet, saying he'd be glad to come and do the painting on Monday if that was convenient.

Great, now I'll have everybody coming to my door at once. I'll have to call somebody back and cancel.
Sounds like a comedy show.
And with my luck, whoever I choose will probably not show up!

Stay tuned.......
Oh, and this is just the upstairs painting (2 bedrooms and a bathroom). Wait until I get the downstairs painted and carpets ripped up!
Posted by Wendy at 7:46 PM 13 comments: