Last September I went to the ocean in Cape Cod. In March I went to St. Maarten, this past May I went to Bimini, which is in the Bahamas so I could swim with dolphins in the wild.  I flipped and flopped weeks before making my decision. Could I really afford to take another trip? Was I just running away from life, from my problems, my pain and grief?

I went anyway. And had a wonderful time.

"What better place to run?" asked Peggy incredulously, "especially if you're looking for healing." Peggy lived in Arizona. She was about my age and a grandma too. We hit it off right from the start.
Immediately I felt better. I stopped scolding myself for indulging. Stopped chastising myself for "running away". Perhaps taking a break is a better way to look at this.
Why not just take some time to relax and drink in the power of the ocean, snorkel and swim with dolphins in the wild, and make new friends while I'm at it? Why not indeed? Life is meant to be lived, so why not enjoy it?

"Surreal," murmured Toni (another new friend) who was standing beside me on board the catamaran appropriately named DolphinQuest.
Surreal, I thought, liking the sound of that word as I gazed all around at endless blue; blue sea and blue sky; where only a thin line defined the horizon.

It was a strange feeling, as if there was no world beyond our boat. We were all alone here in this blending together of ocean and sky.
And then the dolphins appeared. Swimming, frolicking, rolling and tumbling, they seemed only to live for the spreading of joy. There were two of them, then four, then a dozen! Eagerly, I donned my snorkeling gear and one by one, we slid off the boat and smoothly entered the water. (please take a few seconds and click on the video - you certainly don't have to watch it all. It will give you an idea of the dolphin experience, as it was taken at the Wildquest retreat).
The ocean was a beautiful shade of turquoise, and oh so clear. I could see bright green seaweed waving its long fingers, tropical fish bursting with colour: yellow, purple, and orange. They were beautiful and yet looked like they belonged in a child's colouring book!  Even sand ripples that swept along the ocean floor were clearly visible, as were many shells, rocks and strange things I could not identify.
The dolphins, of course were the stars of the show. And they performed well. Two of them swam right under my belly! I could have reached out to touch them (but we are taught not to do that; they can approach us, but we should not touch them). Like children at play, they swam and splashed all around us, probably trying to figure out what these weird slow moving human-creatures were. There was no way we could keep up with them, so they lost interest and eventually swam away.
I made many friends on this week-long Retreat, met kindred spirits and felt nothing but support and encouragement on my path. I hope I was able to give as much as I received on this trip. 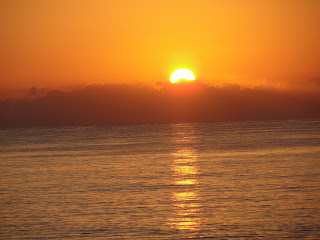 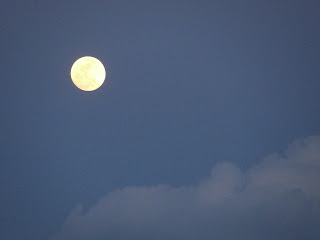 Full moon in Bimini, May 17th. A full moon ceremony was part of this week's programme.
Posted by Wendy at 7:23 PM

Thank you for sharing this wonderful adventure with us. I am so happy for you. :) I can be there with you like a virtual vacation in your words. It must have been so amazing to be in the water with them. I saw them from the ferry we took from dolphin island to Alabama's coast. I loves the prehistoric pelicans as they flew past us. Then they greeted our arrival on the dock. The white sand and water was amazing. It was not pure blue like you may have seen. But just being there was soul lifting. I am so happy at this moment. And feel like this was a healing adventure, and hope to see you have many more wonderful times.

You write so beautiful and relaxing! Glad you are enjoying life and thankful to the Lord for giving it!

I can't imagine anything more blissful or healing that swimming with the dolphins. They are amazing creatures eh? And I just know, in my heart, that David was smiling with you...so glad you decided to go and live. take care.

You're not running away, Wendy...you're living! I think it's wonderful that you are taking these trips and meeting new people, all positive ways of healing. I can only think that David is watching over you, smiling.

My husband and other family members went swimming with the dolphins while we were in Cancun. It was in a much smaller arena, though, where the dolphins had been trained. Still, it was awesome to watch--I sat on the sidelines:) They're such beautiful creatures.

What a wonderful picture you paint! Do these things as often as you can, life is short as you know. Enjoy as much as you can...

Wendy...I'm so glad you went on a holiday. It's done you good and your post say so! So beautifully written...I was engrossed in the details. Loved the video too! The ocean is therapeutic...

Its well known that dolphins bring healing.
So pleased you had these holidays to the sea.
Maggie X

So happy to hear you found some kindred spirits and had a relaxing vacation. The sea is on of those great places that still has unspoiled areas for now.

Hello, We are home from our wonderful trip... We loved it --but there's nothing like HOME.

WOW---I'm envious of all of your wonderful trips. I'm so glad you are able to travel and are meeting so many wonderful friends and making memories all along the way.

We would love to go to some of those places someday --along with about a million other places... ha
Hugs,
Betsy

Dear Wendy,
Your retreat sounds truly amazing. Wild Dolphins and in a wild aquarium! WOW....
Being with kindred spirits and celebrating the Full Moon must have been the sprinkles on the cupcake.
In have fallen in love with my inner "still small voice". Sometimes she is an editor.....
and helps me make good for me decisions by questioning my impulses. Once I am sure of my intention she agrees 100%.
Sounds as if this trip was "renewal of spirit".
Namaste,
Sherry

Wendy that sounds and looks like a wonderful way to spend some holiday time. I think you should do what you can to heal and be happy. I'm sure that swimming with these beautiful creatures is part of that plan.