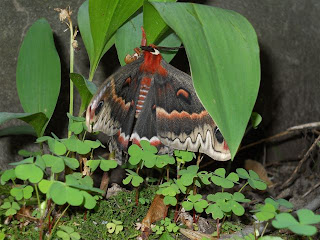 A butterfly appeared one day a few weeks ago on Daughter's lawn, close to the foundation of their house.
The grandchildren wanted to care for her, so Mommy gently picked it up and put it in an old cardboard box. The grandchildren named her Annie. They put leaves and twigs inside the box to keep Annie comfortable.
Annie barely moved. We wondered if she was injured.

The children put ripe fruit in her box to tempt her appetite.
Mommy put sugar water in there as well.
Annie fluttered her wings gently, and hardly moved at all.

Mommy called around first to bird and animal rescue shelters (who could not help) and then the Insectarium. They were able to identify Annie. She was not a butterfly, but a moth. A hylophor cecropia - the biggest moth in North America.

I'd never seen one before. She really was big! The life cycle of the cecropia is only 7 - 10 days. The female lays around 300 eggs, then goes into a sort of dream-like state. The male continues on to fertilize as many as 3 females and then he too goes into a torpor. The adults do not eat (so much for the fruit, but it gave the children a sense of responsibility and they felt that they were taking good care of Annie).

We also learned by the size of her antennae that Annie was not a She - She was a He.
Five days later His life cycle ended.
Posted by Wendy at 4:43 PM

He, Wendy. He was gorgeous. I wouldn't have taken him for a moth either. Hoping you are doing well. Miss your lovely posts.
Mary

Remarkable moth, it warms my heart to see our young ones try to make things right for nature's creatures. I'd of thought him a butterfly too. Give the grands a hug. Missed you.

What a gorgeous moth! I'm glad you were able to identify him, because I had no idea what he was. Perhaps his mate was nearby and you'll have some offspring later that the grandkids can enjoy as well.

Glad to have you back, Wendy; I hope things are going well with your plans to move.

So glad he chose to spend his last days in your care! What a beauty!

So much in nature seems to have no reason. Why make such a beautiful creature who lives for just a few days? I wish someone could give me a really good answer for this.

I hope you are feeling a little better Wendy. One day a the time..

I have missed you. I have given up trying to email as for some reason it just throws the mails back. Never mind, I have held you in my thoughts, and hope you are doing well. How is the move going or not???

Moths are very beautiful and often overlooked. Everyone loves butterflies. I love both.

Such a bittersweet post.
Life is short......and yet we do what we have to do.
The male moth is incredibly beautiful.......so very still.....just waiting for his time to come.

Hope you are fine and it is good to see you blogging.
Maggie X

Hi Wendy! I enjoyed reading these amazing facts! Going into a torpor like that! Such an interesting life cycle. The moth is huge!

How have you been? Sorry I didn't come sooner. Your header photo is gorgeous....love your planter!!

Wendy...it's me again! I'd be delighted if you check out my latest post on Terra farmer. I've included a video of my nephew singing.

As soon as I saw the picture I thought it was a moth, but I didn't know which one. The markings are gorgeous. How lucky your grandchildren are, to have been able to observe this creature so closely, and find out about it's life cycle.

I have wanted to see one of these moths but have never found one yet. He is very beautiful.

He is beautiful. It is good to see you posting again. I missed you. :)

Stick a pin in him and stick him on the wall. I have never seen one. Thanks for sharing!

Wendy...just wanted to thank you for checking out the video. So happy to read your comment!

Thanks for the idea, Grayquill. I was actually going to put him in a shadow box so I could keep him, but when I read the instructions, it did involving sticking pins in the thorax and I just couldn't do that.

So, I've left him to the elements; to Nature. He is sitting under Grandfather Oak, surrrounded by candles, a fat bee who had found his way into my basement and perished, a June bug who I found nearby drowned in a leaf, and some wildflowers. The candles were lit for summer solstice. Now the ants will take care of the rest.

It's a little difficult to let him go, but this is Nature's Way.
Thanks for the comment and the suggestion.

I love your way of dealing with nature and it's ways. The compassion is blended with the stark reality of an eternity that lies beyond us and it is to be respected. Candles lit say a lot. :)

Dear Wendy,
He is gorgeous.
Such an honor to be with him as he finished up his life. Your grandchildren were Backyard Naturalist! There is much beauty in our world and so much to learn.
Happy Solstice.
Namaste,
Sherry

When I was younger, perhaps the age of your grandchildren, I found a large moth cocoon. I brought it home, and put it on the window-sill of our kitchen.
Eventually the moth came out — a Cecropia, which was huge in comparison to other butterflies which had come out of their cocoons in that same window.
Wonderful picture and and heart-warming story! Thanks.

The world of Nature never ceases to amaze me! You are teaching your grandchildren well..they are the future keepers of our world.